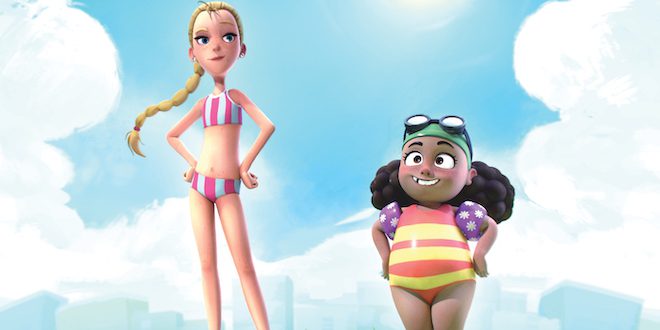 ISLAND
Directed by Max Mörtl and Robert Löbel
2017 |Germany |2:30
A group of exotic creatures frolic on a small island

ANT
Directed by Julia Ocker
2017 |Germany |3:36
An anthill is no simple thing. Each ant has their assigned task and it’s hard to imagine what would happen if one rebelled and decided to do things differently…

THE SWIMMING LESSON
Directed by Tatyana Okruzhnova
2017 |Russia |3:00
On a busy day at the beach, a little boy is captivated by the aquatic adventure stories he hears but soon has to put his own swimming skills to the test.

BLUEBERRY HUNT
Directed by Alexandra Hetmerová and Kateřina Karhánková
2017 |Czech Republic |7:00
Two hungry bears with a craving for blueberry dumplings set out for the forest to look for berries.


DRAGON SLEDGE (Devochka, drakon y papa)
Directed by Evgeniya Jirkova
2017 | Russia |2:30
For every little girl, a father is a knight and for every father, a daughter is a princess.


COUCOULEURS
Directed by Oana Lacroix
2018 |Switzerland | 6:00
In a large forest where single-colored birds live, everyone has found his place in a tree that looks like him. But what happens when a bird has two colors?

BELLY FLOP
Directed by Jeremy Collins and Kelly Dillon
2018 | South Africa | 4:53
It’s Penny’s first time at the public pool and tries to keep up with an obviously experienced diver.

I WANT TO LIVE IN A ZOO (Hatschoo jity w Zooparke)
Directed by Evgenia Golubeva
2017 | Russia |6:00
Sasha decides that living in a zoo is much more exciting than living at home where she is responsible for chores, homework and eating vegetables. She’ll eventually need to determine whether or not giraffes and penguins make for better parents.

TYRANNOSAURUS FUNK
Directed by Sandra Boynton
2017 | USA | 4:10
A spiffy animated T. Rex (voiced by the great Samuel L. Jackson) brings the funk as he sings about the joys of being king of the dinosaurs.

PENGUIN
Directed by Julia Ocker
2018 | Germany |3:37
A timid penguin waiter with a red bow tie goes out of his way to perform his job to perfection.

PATCHWORK MOLE
Directed by Angela Steffen
2017 | Germany | 3:54
A lonely mole embarks on a journey, where he meets many animals who try to help him find a friend.

Presnted as part of the 2020 Tumbleweeds Film Festival.
No Tickets Required. Seats available on a first-come-first-serve basis.