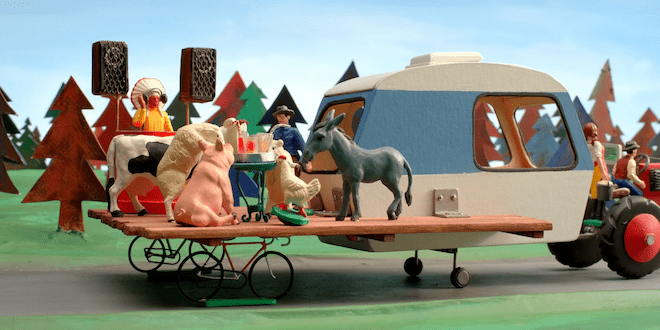 An eclectic collection of films from around the world.

UNCLE THOMAS: Accounting for the Days
Directed by Regina Pessoa
13 mins | Canada/Portugal
A young girl’s tribute to her eccentric uncle, her artistic inspiration and a poet of the everyday.

BOJE
Directed by Andreas Cordes & Robert Köhler
10 mins | Germany
Boje and his father live in a remote cottage by the sea. His father struggles for words. Suddenly, the silence between them is penetrated by the waves of a choppy sea.

Hedgehog’s Home
Directed by Eva Cvijanović
10 mins | Canada
A warm and universal tale that reminds us there truly is no place like home.

Mountain of SGanna
Directed by Christopher Auchter
10 mins | Canada
A young man is stolen away to the spirit world, and a young woman rescues him. A brilliant combination of animation and Haida indigenous art.

Hurlevent
Directed by Frédéric Doazan
7 Mins | France
As the wind blows it browses through a book of strange, tempestuous alphabet creatures.

A Town Called Panic: The County Fair
Directed by Vincent Patar & Stéphane Aubier
26 min | France/Belgium
Thanks to working hard and some self-sacrifice, Indian and Cowboy successfully pass their school exams. As a reward, Horse bought VIP tickets for the Great Agricultural Fair, but he’s immediately hospitalized with amnesia. They must find the tickets!