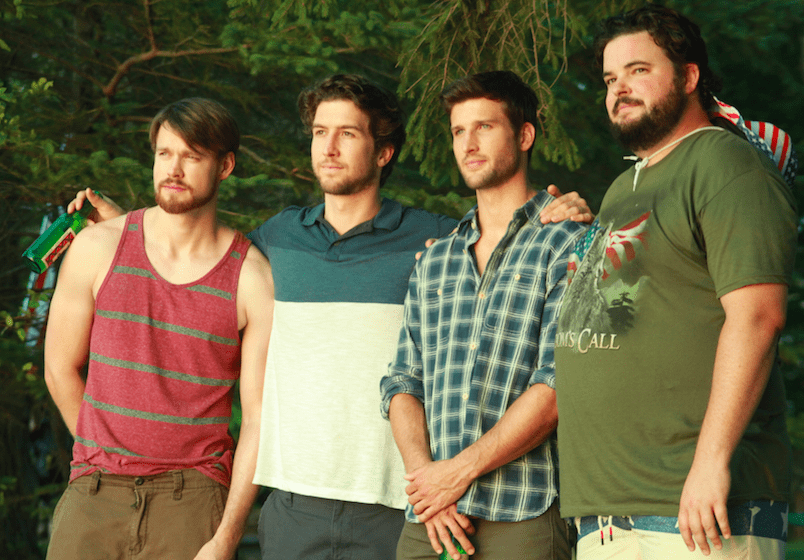 4th MAN OUT
This event has passed.

Adam, Chris, Ortu, and Nick have been friends since childhood. They live in a small town and work blue-collar jobs. They play poker, drink beer, and hang out at local bars. On Adam’s 24th birthday, he has a secret he needs to tell them that he’s afraid will change everything—he’s gay. Trying to plan the perfect moment to reveal his news, he instead blurts it out quite suddenly, much to the surprise of his pals.

More than a run-of-the-mill coming-out comedy, Fourth Man Out is a warmhearted story about friendship, family, and acceptance. The chief sources of the comedy are Ortu and Nick; they accept Adam’s homosexuality and mean well when they discover his online dating profile, but they are incredibly awkward about letting their friend know his status as a member of their pack hasn’t changed. They even unintentionally “out” Adam to his über-religious neighbor in one of the film’s more hilarious moments.

Meanwhile, Adam is wading into his small-town dating pool and finding the array of suitors exceedingly limited. After several bad blind dates and an encounter with a mysterious stranger, Adam’s sense of loneliness grows, leading to a drunken misunderstanding with his best friend, Chris.

Although the plot of a gay man coming out is perhaps a bit heavy-handed, the film’s small-town, blue-collar atmosphere and the cast’s perfect comedic timing inject depth and genuineness to Andrew Nackman’s film. Moreover, this delightful romp puts an intriguing spin on the “bromance” genre, bringing it squarely into the LGBT arena. Fourth Man Out will leave audiences of all demographics smiling from ear to ear.