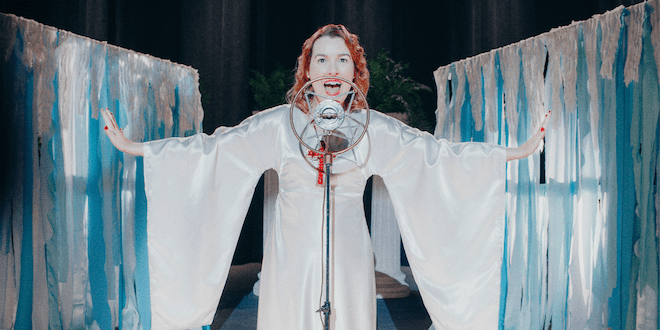 Never has religious hucksterism (or taking a break from it) been so much fun! Famous 1920s Pentecostal evangelist Sister Aimee Semple McPherson tires of healing the sick, fakes her death, and takes off with married lover Kenny to Mexico to pursue his dream of writing about its legends. She resurfaces some weeks later. The movie, billed as 5½% true, recounts her attempts to disappear despite her fame and her growing disenchantment with Kenny. Enter Andrea Suarez Paz as Rey, the sexy and mysterious driver hired to take them safely to Mexico.

This tall tale told well is elevated by inventive performances by Anna Margaret Hollyman as the title character, Michael Mosley as Kenny, and Andrea Suarez Paz as Rey.