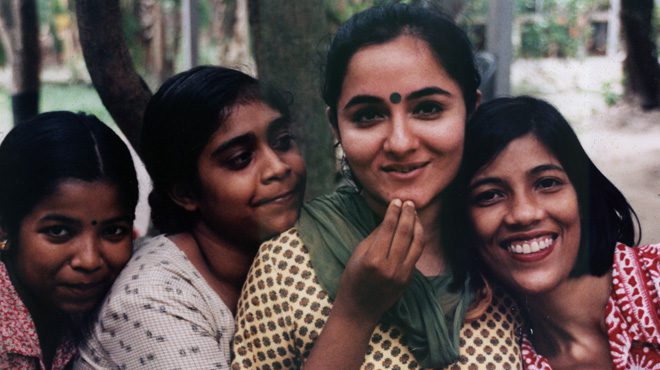 THE DAY MY GOD DIED

Anuradha Koirala is founder and director of Maiti Nepal, a non-profit network that rescues, rehabilitates and advocates for children in the sex trade.

The Day My God Died is a feature-length documentary that presents the stories of young girls whose lives have been shattered by the child sex trade. They describe the day they were abducted from their village and sold into sexual servitude as, “The Day My God Died.”

The film provides actual footage from the brothels of Bombay, known even to tourists as “The Cages,” captured with “spy camera” technology. It weaves the stories of girls, and their stolen hopes and dreams, into an unforgettable examination of the growing plague of child sex slavery.

Through the film we come to know victims such as Gina, sold into sex slavery at age 7 and beaten with sticks and aluminum rods. Anita, lured by a friend then drugged and sold at age 12, was beaten and threatened that she would be buried alive. Girls are gang-raped, beaten and forced to service up to 20 clients a day as they are held in perpetual sexual servitude.

The film also introduces us to the heroes of the movement to abolish child sex slavery – non-profit organizations which rescue and care for former sex slaves. Some victims have emerged to form their own underground railway out of slavery. Maili, trafficked at 19 along with her infant daughter, risks her life to help other girls. We see Jyoti, sold at age12, lead a raid on a brothel resulting in the rescue of seven girls and the arrest of two brothel owners.

Children are the commodity consumed by the voracious and sophisticated international sex trade. Recruiters capture them, smugglers transport them, brothel owners enslave them, corrupt police betray them and customers rape and infect them. Every person in the chain profits except for the girls, who pay the price with their lives. Sexual servitude is a virtual death sentence. During the making of the film, in Bombay alone, 90 new cases of HIV are reported every hour and the girls suffer up to an 80% HIV/AIDS infection rate.

The Day My God Died documents the tragedy of child sexual slavery and profiles the courageous abolitionists that need our support.

Presented in partnership with KUER’s RadioWest.