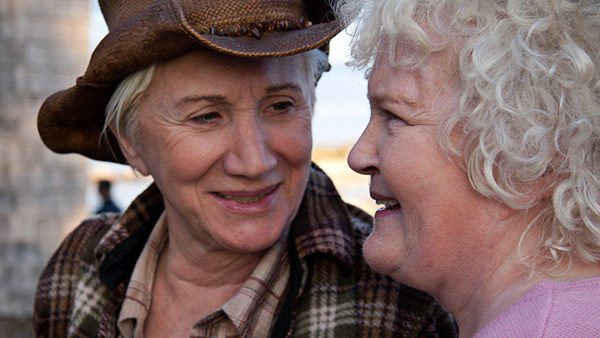 Wouldn’t you like to see a happier ending to Thelma and Louise? A couple of different turns down roads more traveled, and Louise and Thelma perhaps would have ended up like Stella and Dot.

You probably recognize, and know you should admire, the two leading ladies of Cloudburst for their Academy Award®-winning supporting roles (Moonstruck for Olympia Dukakis and My Left Foot for Brenda Fricker), but wouldn’t it be great to see them as lead characters on a tequila-induced-foul-mouth-laden road trip to Canada to finally get married after 30+ years together? It is great.

Olympia is Stella, the alpha female of the couple whose impassioned ode to female anatomy includes a word that I thought shall-not-be-named-EVER. Hey, if Olympia Dukakis can take back the power of such a word, then I can own it, too! Brenda as Dot provides sweet checks and balances to Stella, and the hot guy they pick up turns out to actually need the kind of mothering Dot and Stella can provide, so there isn’t any nasty stealing (like Brad Pitt did in Thelma and Louise) to go along with the gratuitous male nudity featured (and they go farther this time than Brad did—so there is something for everyone)!

Cloudburst offers the long-awaited chance for all of the above and for what we all want—that one perfect day with the loved ones we get to choose to be in our family. – Marcie Collett