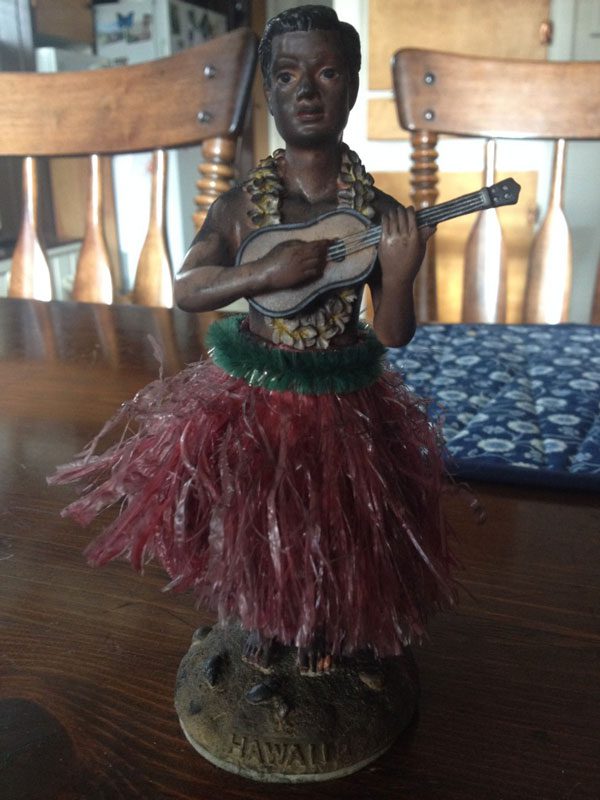 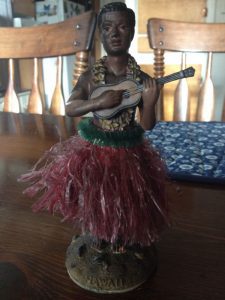 Hula Man is gone, but my hope is not.

My coworkers and I were allowed to enter the ruined structure at 122 South Main Street at 10:30AM on Tuesday, March 29th, just four hours after the flames that ravaged it were extinguished. Residual heat rose from the charred opening that once contained the stairs to the basement, and the air inside had all but been replaced with the odor of burning industrial materials.Even the portions of our 3,000-square-foot space untouched by fire were thoroughly blackened from smoke. The scene was made all the more desolate by the lack of electricity.

Fighting claustrophobia, I used my iPhone flashlight to carefully step over ceiling fragments and waterlogged film festival programs littering the floor. While sifting through the remains of my ruined workspace for anything I could salvage, a flash of pink cellophane between my melted computer monitor and a bent Ikea desktop organizer (containing a now curled ruler), caught my eye. There, my 4-inch tall, plastic Hula Man stood upright, looking back at me. His pink hula skirt was slightly singed, but his pose was straight, and he held his ukulele proud. Not quite believing yet that he had survived the heat wave that destroyed virtually everything else on and around my desk, I reached out an index finger and nudged him, fully expecting the figure to fall apart. The tears welled up in my eyes as I watched his rhythmic, answering sway. (I told my colleagues it was because of the smoke.)

I carried Hula Man home in a plastic Smiths bag and set him on my dining room table (i.e., my new work space for the short-term…however long that is), where he would serve as my symbol of hope for Utah Film Center, my resilience in resin …for fifteen minutes.  It takes only ten for a home to fill with the smell of a burning film-focused nonprofit organization.

Relegated to the patio table on my front porch after that, H.M. sat with me every day while I enjoyed my morning coffee (as he had for the past two years at my Film Center desk).  His calm features, painted with such care, instilled in me a much-needed sense of optimism before I retreated to my laptop inside, where I would work for the next 8-10 hours.

Though (thankfully) no one was injured in the fire, the sixteen-person Film Center staff is still coping with the sudden, traumatic loss of the creative, collaborative setting that made our work possible.  This collection of bricks and mortar was not merely a building; rather, it was a hub that facilitated the processes of invention and refinement, both necessary to the production of the robust film programs with which we have served our community since 2002.

More than that, the destruction of this buzzy, open office–where we spent approximately one quarter of our waking lives together–has forced us to say goodbye to a way of life. This sense of loss is compounded by the fact that each of us staffers is currently working remotely. Though we are experiencing a form of mourning together, we are daily unable to address each other’s emotional highs and lows as we each sit hunched over our personal laptops, trying to block out the continual, high-pitched squeal of a coffee shop’s espresso machine or the piercing gaze and pathetic whines of our attention-seeking dogs.

My colleagues and I have so far been successfully staying in touch through email and (nearly constant) instant messaging. Just yesterday, a fellow staff member forwarded all of us instructions for how to remove the smoke smell from paper materials. Though she and others had concluded from earlier research that smokiness in plastic was much more difficult, if not impossible, to remedy, I decided I had to at least try–for brave H.M.’s sake.

I stepped barefoot onto the cool cement of my front porch and immediately saw that H.M., along with a plastic bag of other small mementos I had literally plucked from the ashes, were gone.  Black and white pictures from my friend’s wedding last summer; a Golden Gate Bridge business card holder I bought two years ago to commemorate my first trip to San Francisco, where I ran my first marathon; an artistic, wooden carving of my name presented to me by a friend in my seventh-grade shop class; and my Hula Man, adopted when I was fifteen from the shelves of a chintzy souvenir stand on the Big Island of Hawaii, and who had since moved with me to three different states; They had all been stolen.

This was the first time I had cried since the fire happened. And I didn’t just cry; Pushed to my breaking point by the second abrupt removal in a week of an object upon which I projected my professional and creative hopes and dreams, I wept bitterly.

Why would someone bother to steal knick-knacks, especially ones that reeked of smoke?  Why did they take these things that had no value to them but, to me, held great meaning?

At this second thought, I immediately realized that the key word here was “held.” The objects were not the meaning I gave to them. Though my office building and my Hula Man were gone, the hope I placed in them need not be.

Since that day, I have reflected on the cyclical nature of life, and how perfectly the juxtaposition of the burned Utah Film Center across Main Street from the construction site of the nearly complete Eccles Theater reinforces this principle.

Utah Film Center is not an office building. We are a collection of members, artists, staff, board, volunteers, partners, and community members who believe in the incredible power of film to change the world. It will take hard work, but we will indeed rise from the ashes, stronger than we ever were. And, now, in my short-lived moments of doubt, I take comfort in the fact that the smell of hope is currently clinging, unyielding, to H.M.’s kidnapper’s hands, clothing, and hair.