Do you ever feel like there are so many great films and series out there that you don’t know what to watch first? You’re not alone! Even staff at Utah Film Center are eager to watch the latest and greatest content out there, so we decided to collectively submit the titles we’ve each been watching and suggest them to our amazing community. Scroll through this post to check out the films and series you can add to your summer streaming queue. And of course, don’t forget to tell us your thoughts in the comments below!

“If you liked Stranger Things, this decades-spanning, mind-bending German sci-fi series will freak you out. Watch in German with English subtitles rather than the default English-dubbed version, the original actors’ voices are way more convincing.” –Davey Davis, Programming Coordinator 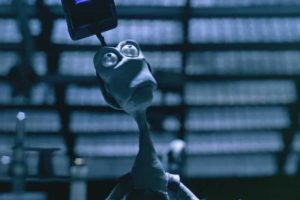 SHORT OF THE WEEK

“With the Royal Wedding, I decided I better dive into learning more about Meghan Markle after a recommendation from Penny Frates. And it’s fun!” –Elisabeth Nebeker, Executive Director

“Excellent Horror/Zombie movie from Canada. A DJ barricaded in his radio station tries to warn public of a virus and its less-than-ideal side effects. Suspenseful, smart, with an appropriate amount of gore.” –Jeff Horne, Systems Coordinator

“Set two hundred years in the future after mankind has colonized part of the solar system, The Expanse is a noir thriller/mystery/political suspense story told with a talented, diverse cast and amazing cinematography.” –Sarah Mohr, Office Coordinator & Executive Assistant to Geralyn W. Dreyfous

“Even with growing up with the stories and stuffed animals, and maybe because so, I was not very interested in seeing this silly looking film. However, after being repeatedly told by trusted friends and critics how good it and its sequel were, I took a chance and am glad I did. One word: charming.” –Josh Levey, Marketing Director