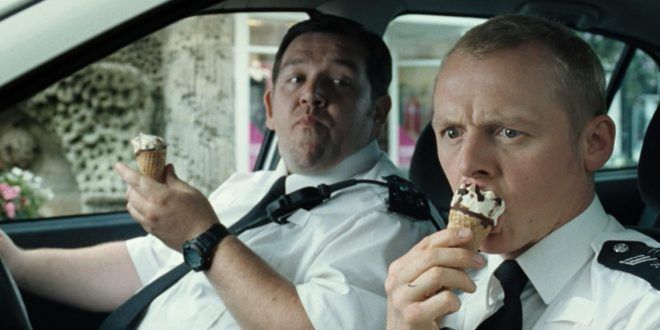 Hot enough for you? Us too. After a day of swimming, hiking, or sitting in the shade, enjoy these streaming movies and series, as suggested by our staff.

This post contains affiliate links and we may receive commissions for the purchases through these links at no extra cost to you.

“My favorite, and arguably the best film of the Edgar Wright’s Cornetto Trilogy, Hot Fuzz is a hilarious film about a big-city officer who is relocated to a seemingly quiet farm community…but things are not what they seem. Full of great performances and send-ups to other films and TV shows.”–Josh Levey, Marketing Director

“A man, his neighborhood, and his Puggle are the central characters in this series of quick hit episodes ideal for dog lovers. This series is fresh, original, and feels like the filmmakers were granted complete creative freedom. Feline peeps should look elsewhere, for everyone else…Meet Bruno!” –Jeff Horne, Systems Coordinator

“Beautiful archival footage from CNN is used to highlight major moments in history and how those moments influenced one of the most personal art forms: fashion.” –Mariah Mellus, External Relations Director

“There’s no time like the present to (re)discover Harry Nilsson’s animated gem about a boy and his dog in a land where everyone is supposed to have a point, literally and figuratively. Don’t miss this classic tale of anti-authoritarianism that’s fun for the whole family!” –Russell Roots, Operations Senior Manager

“A realistic look at the modern world of preteens, from writer/director Bo Burnham and starring the astonishing Elsie Fisher. Rated R for “language and some sexual material”, which ironically means 8th-graders aren’t allowed to watch because it too accurately portrays their lives. 😒” –Leslie Means, Marketing Coordinator