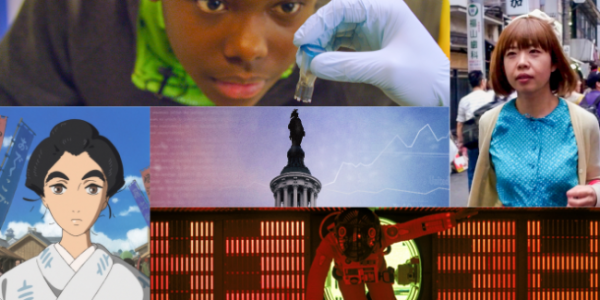 It’s one of our greatest pleasures at Utah Film Center to showcase curated films that connect to the work and art that community groups participate in and present. In addition to our Free Film Tuesdays at the City Library and our Through The Lens monthly series, we’re pleased to invite you to a number of additional screening partnerships this spring and summer, free and open to the public.

Women’s stories at UMOCA
The films in this series tie in with the Utah Museum of Contemporary Art’s 2020 Women-Led Exhibitions. They are a celebration of groundbreaking female artists, architects, and filmmakers, and showcase the activism and achievements of contemporary women. Each event will feature a post-film Q&A or pre-film component tied in with the museum’s exhibits. These films will play on Friday nights at 7:00 PM at the UMOCA auditorium.

CinemaJam at the Marmalade
Heated Issues, Open Conversations. Many of the polarizing issues we face today are so contentious because they are complex. This series of films looks at some of the biggest issues we face: economic inequality, immigration/race relations, climate change, and our political system. After screening a film on one of these subjects, KRCL Community Radio will facilitate small group discussions between attendees. This series is spread throughout the year on Saturdays at the Marmalade Library at 11:00 AM; all screenings occurring before the 2020 November Elections.

UMFA – Edo Japan in Film
These films all explore the Edo period in Japanese art and culture, in partnership with the Utah Museum of Fine Art’s Seven Masters and Beyond the Divide exhibitions. On April 1st, come early for an Open Studio inspired by these exhibitions. These screenings are on the 1st Wednesdays of April-June at 7:00 PM at the UMFA Auditorium.

Landmark Films Series
While most of our films are rarely seen on the big screen outside of film festivals and select theaters around the world, the Landmark Film Series at the City Library brings influential films back to the big screen, paired with informative talks by local film experts. The City Library, the Utah Film Center and the U of U Department of Film and Media Arts presents a series of important films, American and international, in the Library’s Main Auditorium. Join us one Sunday a month at 1:30pm for a great ride!

Talks for the launch films will be given by:
Andrew Patrick Nelson, PhD
Chair and Associate Professor, Department of Film & Media Arts
The University of Utah

Science on Screen
Though this series is on our regular Tuesday night at the City Library, we are happy to bring back Science on Screen as a monthly series starting in March. Science on Screen features creative pairings of current, classic, cult, and documentary films with lively introductions by notable figures from the world of science, technology, and medicine. Our first film,
Human Nature, is a provocative exploration of a genetic breakthrough called CRISPR’s far-reaching implications, through the eyes of the scientists who discovered it. The film will follow a presentation by Dr. Dana Carroll, a Distinguished Professor in the Department of Biochemistry at the University of Utah. Dr. Carroll is a member of the National Academy of Sciences recognized for his work in the area of DNA repair and recombination.