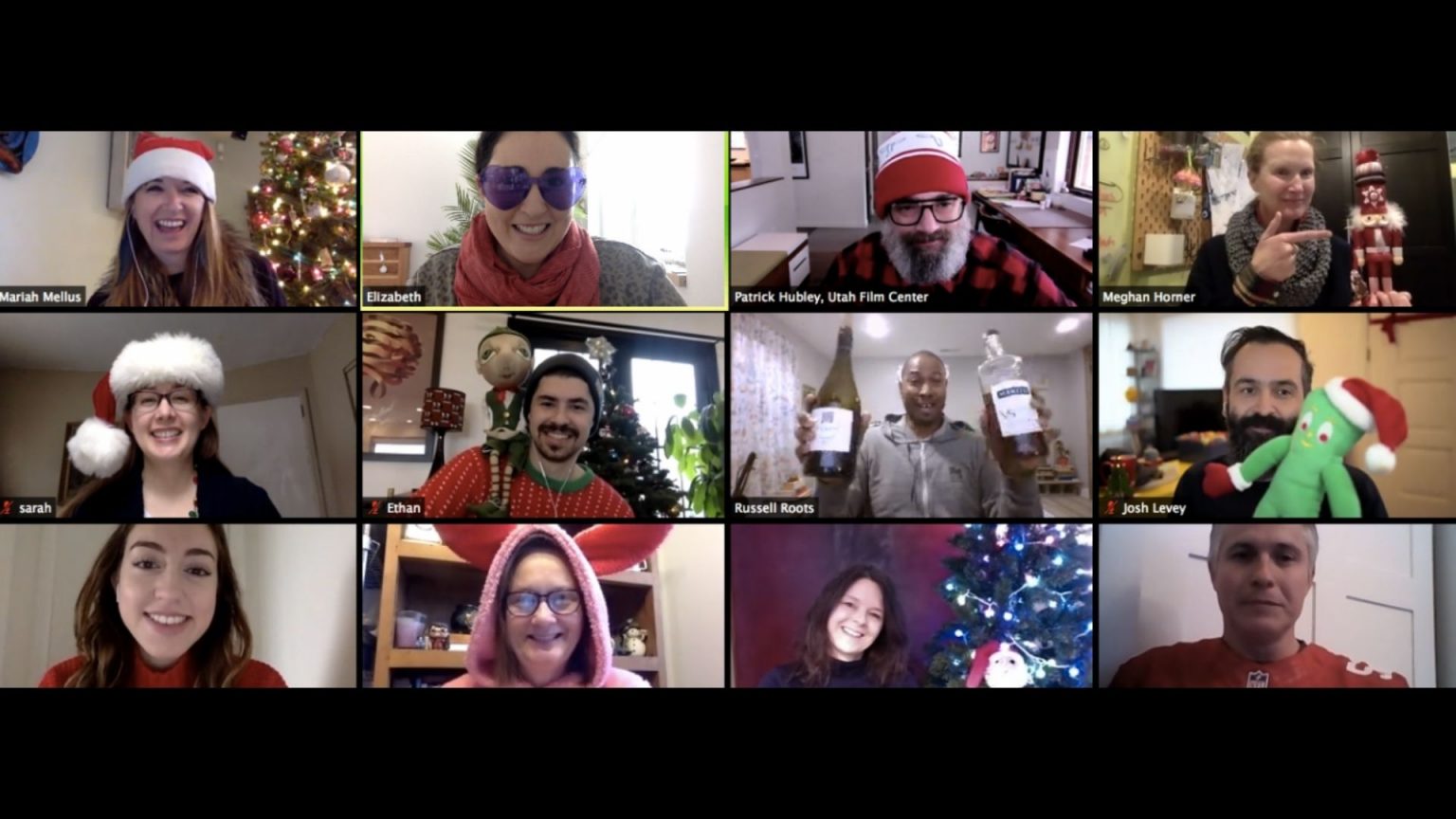 This year we turned to movies, music, and podcasts to help make sense of an upside-down world, to pass the time, and to connect with our friends and family while at home. While movie theaters remained closed, Utah Film Center staff flexed their cinephile tendencies and streamed hours and hours of content in a variety of formats (and we have the insane iPhone screen time reports to prove it).

Here is what your friendly local indie film fans from Utah Film Center found impactful or entertaining this year. Browse and enjoy these selections while we take some time off to bond with our families… and watch more movies!

No Man’s Land by David Byars
I found this film riveting given the access the director had to the group occupying the Malheur Wildlife refuge during the 2016 standoff. I find the Public Lands debate complex but imperative and this film shares opposing points of view fairly. It also illuminates the all too common issue of social media playing a key role in inciting panic and further polarizing the people on each side of an issue. (selection by Lizzy)

Binti
When police raid the home of twelve-year-old Binti and try to deport her and her dad, they are forced to flee. By showing the plight of refugees from the Congo living in Belgium, it illustrates the universality of the human experience and builds empathy in those who watch it. It’s also really funny. I was lucky enough to be in the audience for half a dozen screenings we did for Tumbleweeds Film Festival and Festival Field Trips, and Binti’s story was exciting every time. (selection by Leslie)

Public Trust
This beautiful and thought-provoking documentary conveys an alarming message about the reality of corporations pillaging public lands in the United States. The most fascinating realization you will have from watching this film is that such a seemingly universal principle–the conservation of public lands–can be threatened for the purposes of corporate wealth. I was truly moved and motivated. It’s a must-watch that will spark your inner activist. (Selection by Meagan)

Mossville: When Great Trees Fall
What happens when communities are destroyed by petrochemical drilling or processing? Who are these communities? And what happens to their residents? This intimate film shows what happens to a community and its residents as they are forced to leave their hometowns due health issues and land grabs caused by petrochemical companies. Subject Stacey Ryan’s story is eye-opening and heartbreaking, and gives an American face to what can only be called environmental racism. This is the story of what happens if the subjects of Public Trust and The Ground Between Us are not successful in stopping government-approved fossil fuel operations in historically marginalized communities. (selection by Josh)

Slay The Dragon
This film was eye opening for me. I knew that gerrymandering was going on, and that it is one of the foremost threats to our democracy. I had no idea the shamelessness behind it, nor was I aware that it is only ONE of the tools in the toolkit those in power use to keep their power. That it follows the people and movements that are taking on gerrymandering around the country gives me hope. After our most recent election, it might be easy to put this issue in the rearview, but I would encourage anyone and everyone frustrated with our political processes to watch this film. Important work needs to be done in the long period between elections, to ensure our right to voice our opinions and to hold our elected officials accountable endures. (selection by Meghan)

Welcome to Chechnya
This documentary is incredibly hard to watch but what it unearths is urgent and vital. Focusing on a group of activists led by a former journalist that is pushed to take a stand against authoritarianism, the unbelievable journey of this film pulls the curtains back on draconian Russian and Chechen anti-LGBTQ measures while utilizing “deepfake” facial obscuring technology to follow one man that dares to tell the world what is happening. A singular work of heartbreaking proportions. (selection by Russell)

Coded Bias
Coded Bias will shake you to your core and have you searching for property off the grid. This film is an expose on the wide use of facial recognition to track and predict human behavior and the bias AI systems are inheriting from their creators. If you really want a reason to turn off technology this is a great companion film to The Social Dilemma. Straight out of a scene from the 2002 film Minority Report an algorithm is always watching you in 2020! On the bright side this film comes with a list of resources and organizations that are pushing for an inclusive, transparent and democratic use of these technologies. (selection by Mariah)

Stories explored outside of the Utah Film Center realm:

Beyonce’s Homecoming Documentary
Not only am I inspired by the energy and artistry of the performances, but to see Beyonce’s personal struggle to get to a monumental moment in her career was incredibly powerful. #MyQueen
I enjoy the way she honors everything from the importance of the HBCUs, to Black culture, her family and the virtue of hard work. Though it was released in 2019, it will always be a go-to for a good time… especially in a pandemic.

I’m Thinking of Ending Things
I am a huge fan of writer/director Charlie Kaufman. I love the way he challenges perceptions of truth and reality. Jessie Buckley, Jesse Plemons, Toni Collette and David Thewlis are the perfect cast to take us on this trip of a woman, unsure of her commitment to the relationship, meeting her boyfriend’s parents for the first time.
(Also it’ll help if you watch Oklahoma first.) (selection by Leslie)

Four Good Days
I watched this film’s premiere at the 2020 Sundance Film Festival. It’s a devastating story about the dark depths of drug addiction starring Glenn Close and Mila Kunis. Both actresses make an authentic performance as an estranged mother and daughter working through their issues while the daughter is recovering from substance abuse. Through many tragic and raw scenes, Four Good Days will devastate you enough to confront the nationwide crisis of opioid use. (selection by Meagan)

Influence
Diana Neille and Richard Poplak’s documentary delves you into the world of global political PR as it unravels, with the participation of partner Tim Bell, the work of disgraced PR powerhouse company Bell Pottinger – the firm that subverted democracy around the world including campaigns for Margaret Thatcher and Augusto Pinochet, and was ultimately disbanded due to its racially charged 2016 work in South Africa. This is a film that exposes how disinformation and fake news is devised and used to divide people around the world and throw democracies into turmoil. Truly chilling. A great companion film to The Great Hack and The Social Dilemma.
Honorable Mention: Steve McQueen’s Small Axe (selection by Josh)

The Sound of Music
When my children were little, I used to sing old standards and modern favorites as part of their bedtime routine. They are bigger and we’re always rushing, and these routines feel like a thing of history. However, my youngest requested that we sing “My Favorite Things” quietly together as he was processing his frustrations with the pandemic. I was reminded of how we tend to reach for things that bring us comfort – like music, good movies, and wild geese that fly with the moon on their wings – when the world seems incomprehensible. So, this week, we’ll put in the DVD, pop some corn, and sing along. Now, if I can just get them to fit into their lederhosen… (selection by Meghan)

Scene on Radio, Season 4, “The Land That Never Has Been Yet”
A riveting examination of the American experiment via one of the best currently produced podcasts. Take a dive into the often forgotten or willfully ignored corners of the US’s creation, ascendancy, and hegemony. Frequently unnerving and eye opening, this socio-political history lesson is also a labor of insight and heartwarming wit. What lies ahead for the country when the democratic truths it reared itself on aren’t as they seem? And where do we go from here? (selection by Russell)

Huzzah! For The Great
Huzzah! For The Great, a satirical, comedic drama about the rise of Catherine the Great from outsider to the longest-reigning female ruler in Russia’s history. I felt akin to Catherine as she plots to take over the throne and transform Russia from a destructive, barbaric patriarchy into a society that cares for the poor, respects women, and values education and art. In what is best described as a series of dark comedic sketches featuring lavish backdrops and wickedly funny dialogue, this series manages to be both completely ridiculous and inspiring. (selection by Mariah)