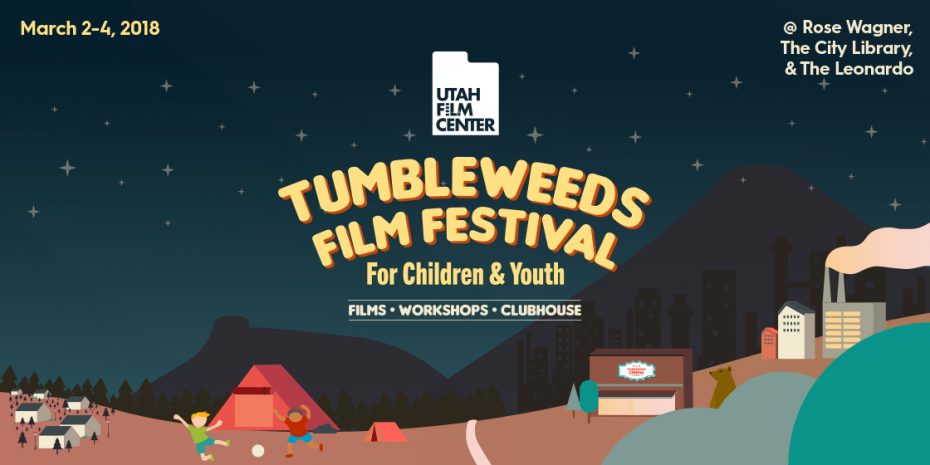 Utah Film Center’s 7th annual Tumbleweeds Film Festival for Children and Youth takes place March 2–4, 2018 at Library Square and the Rose Wagner Performing Arts Center, presented in partnership with The City Library, The Leonardo, and UMOCA. Tumbleweeds features films from around the world and provides culturally-enriching, curated film, and media arts workshops for younger audiences. Founded in 2011, Tumbleweeds is the only film festival for children in the Intermountain West and has quickly become one of Utah’s premiere events.

Who goes to Tumbleweeds?
Kids of all ages! Films are programmed with an eye toward introducing young audiences to the joys of international and independent cinema. Parents and adults will enjoy the films that have interesting universal themes and messages. Plus the Clubhouse is a great way to learn and experience interactive media with your child.

About the Festival
Utah Film Center’s Tumbleweeds Film Festival is an annual film festival for children and youth, ages 4 and up, providing opportunities for film lovers of all ages to engage their creative spirit, and bridge cultures by experiencing films whose stories transcend geographic, cultural, and political boundaries. Past Festival films include A Monster in Paris, The Eagle Huntress, Oddball, Long Way North (Tout en haut du monde), Eleanor’s Secret, Felix, Chandani the Elephant Whisperer, My Friend Raffi, I Learn America, Rainbow, and Ernest & Celestine.

10 Ticket Festival passes, good for your choice of 10 films and/or workshops are now on sale for only $50!
Click here to purchase your Festival Pass.

EDHEL
Saturday, March 3 @ 10 AM
The Leonardo

THE BIG BAD FOX AND OTHER TALES
Saturday, March 3 @ 12 PM
The City Library

UP IN THE SKY
Saturday, March 3 @ 5 PM
The City Library

BAMSE AND THE WITCH’S DAUGHTER
Sunday, March 4 @ 1 PM
The Leonardo

THE DAY MY FATHER BECAME A BUSH
Sunday, March 4 @ 3 PM
The City Library

Workshops take place at The Leonardo and tickets are $10 each.

Space is limited, so purchase your tickets today!

10 Ticket Festival passes, good for your choice of 10 films and/or workshops are now on sale for only $50
Click here to purchase your Festival pass.

The Tumbleweeds Clubhouse is free for all Library Square patrons and features over 20 craft and technology activities in The City Library’s Urban Room (main lobby) and The Leonardo’s Entrance Atrium.
The Clubhouse is open Saturday and Sunday 10am to 5pm.

Snap a photo of yourself and get official with this badge making photobooth and customization station. A silly badge works just as well as a serious one.

Get your picture drawn by the Hand Drawn Photo Booth, a pretend photo booth “machine” operated by a real-live artist. The photo booth can draw anything in reality and from your imagination. Request a picture as a character from a film or let your imagination go wild!

Phenakistiscope! Thaumatrope! Zoetrope! What the heck do those words even mean? You’ll make your own of each of ’em —and more!— with Salt Lake City Maker Faire, and become an optical illusion wizard.

In honor of Dr. Seuss’s birthday, join us as we create, paint, and decorate his famous fish from “One Fish Two Fish Red Fish Blue Fish” that will be part of a collaborative installation leading into the entrance of the Film Festival! All of the sculptures are made from upcycled and previously used (lightly loved) materials, so you can learn how to do this at home!

Shadow puppets are a beautiful storytelling art form from Bali. Puppets from the Utah Museum of Fine Arts’ Education Collection will offer inspiration as you craft your own moveable shadow puppet. Flashlights and a puppet theater will be on-hand to bring your puppet to life.

Swoop by the University of Utah’s Youth Education booth to decorate your own Swoop mask. Represent the U with pride! Enter to win a gift bundle that includes a $50 gift certificate that can be used toward youth education tuition for 2018.

Blow off some steam messing around with Discovery Gateway’s giant blocks. A good post-film stress reliever. Discovery Gateway will also be making suncatchers out of tissue paper and construction paper. A fun craft for younger kids!”

Build dancing animals, robots, and aliens with found materials, then make a video of them dancing on our fun backgrounds using your phone!

Using only aluminum foil and your imagination, create a boat that can hold the most marbles before sinking.

Kids and their families can experiment with the power of the wind as they create devices and watch them fly in a wind tube.

DIY for Me - Craft Lake City

Craft Lake City will be bringing their artistry and know-how in an interactive project that you can take home, details to come!

These typists are the Poem Pros, waiting to type up any story you want on the spot. Tell them what's on your mind and they'll get to work.

Want to touch a real human brain? Or see what they look like through a microscope? The Neuroscience Program at the University of Utah will be presenting all manner of brain-based shenanigans, and will challenge you to brain teasers as well.

Learn how to make your very own mini light saber using batteries, LED lights, straws and tape. Kids will learn how to create their own (and fun stuff like basic electric circuitry! Yeah!). Great for future Jedi and electrical wizards alike!

Check out a vareity of cutting-ege interactive and augmented reality applications on tablets. Learn the latest music, robotics, movies, and drawing technolgies.

Documentaries bring us real stories, but how do virtual reality documentaries work? Feel what it's like to be immersed the story with 360 documentarian Carol Dalrymple of KUED.

Clark Planetarium produces video games and dome movies that are sold all around the world.  The Defend The Earth video game is a fun way for people of all ages to see how they do protecting the Earth from an extinction level meteor event like the dinosaurs experienced.  It uses real solutions that have been suggested by scientists.  Check out Clark Planetarium and see if you can defend the Earth!

Playful Corp is on a mission to bring joy to the world, one game at a time, bringing characters and stories to life in ways never before possible. "Star Child" is Playful's sci-fi cinematic platformer coming to PlayStation VR in 2018. “Super Lucky’s Tale", a launch title for the Xbox One X, is a delightful playground platformer featuring a lovable fox named Lucky.

Pop into the Leonardo for a multi-station hands-on experience in Mini Movie Making: Green Screen, Zoetrope, Animation, Storyboarding and all manner of jumping about! What is a story you want to tell? We will show you how to begin to tell it as a movie!

Look out for drawing donkeys around the Leonardo: art, tech, and science-based stations where you can create images of what you see around the exhibit. Draw, shape, design!

These typists are the Poem Pros, waiting to type up any story you want on the spot. Tell them what's on your mind and they'll get to work.

Free activities for Teachers and Classrooms

Festival Field Trips
For Grades 1+
The week leading up to the Festival we are proud to offer school screenings in Salt Lake City and West Jordan, each with a post-film discussion. All participating teachers will receive a study guide packet. This year we expand our offerings with a special Thursday all-day event that combines a film screening, post-film discussion, and workshops. Underwriting for bus/transportation support is available.

Film Spark Teacher Workshop
Teacher of all subjects in teams of 3 or more; grades 6-12
Film can spark conversation like few other platforms in the classroom can so the Utah Film Center created Film Spark to help teachers with a curriculum that provides structure for discussing important global topics. At Tumbleweeds join the Utah Film Center and documentary director Jean Michel Dissard, from the highly acclaimed film I Learn America for a free Film Spark workshop focused on integrating award-winning documentary films into your classroom. Each participating school team (3 or more teachers grades 6-12) receives a Film Spark Volume I curriculum guide containing twelve documentary DVDs and corresponding, standards-linked study guides, and Utah State Board of Education relicensure credit. To sign up email rwray@utahfilmcenter.org.

To learn more about the specific Film Spark documentary titles and to watch their trailers, visit utahfilmcenter.org/filmspark 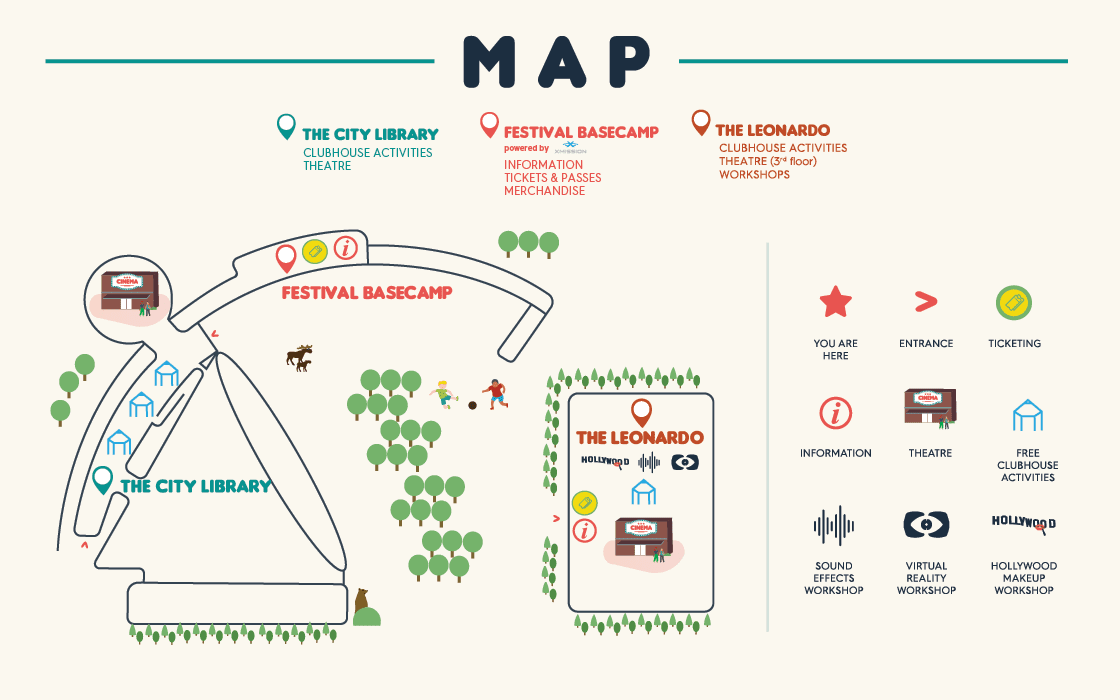 2018 TUMBLEWEEDS FILM FESTIVAL IS MADE POSSIBLE BY THE SUPPORT OF