Tuesdays at the Library

One of the Utah Film Center’s longest running partnerships is with the Salt Lake City Public Library (SLCPL).

It all started in 2003 when the Utah Film Center was less than a year old and set up shop at the Main Library branch. The official Film Center offices were located on Level 1 and housed the tiny staff of three. It was also around this time that the Film Center began showing weekly films in the Main Library’s auditorium. The weekly film tradition still continue to this day, 10+ years later.

Not many people realize this, but the Utah Film Center shows a free public screening EVERY TUESDAY at 7 pm at the Main Library. This upcoming Tuesday, August 19, Detroit Unleaded will grace the big screen. 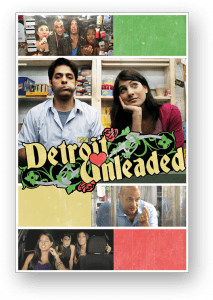 The film is a fresh take on a boy-meets-girl comedy set in Michigan, and introduces audiences to Sami who runs his family’s gas station with his cousin Mike, a charismatic hustler. More than just a pit stop, their station sees a steady stream of unforgettable and hilarious customers. When a gorgeous girl named Najlah delivers long-distance phone cards to the station, Sami quickly falls for her from behind the bulletproof glass. To view the trailer click HERE.

Other than showing our general programs EVERY TUESDAY at the SLCPL the Utah Film Center and Salt Lake City Public Library partner with the Natural History Museum of Utah for a special evening of film–Science Movie Night. The second Tuesday of every month the free movie screening is followed by a lively discussion with an expert in the field of study presented in the film. All Science Movie Night films also begin at 7pm in the Main Library Auditorium.

Notes on Blindness was directed by Peter Middleton and James Spinney, is 13 minutes long and tells the story of writer and theologian John Hull. Hull became blind in 1983 and to help make sense of his loss, he began keeping an audio diary. Encompassing dreams, memories, and his imaginative life, Notes on Blindness immerses the viewer in Hull’s experiences. The film was selected to be a part of the 2014 Sundance Film Festival as well as the 2014 SXSW Film Festival.

Duk County was directed by Jordan Campbell, has a 37 minute run time and recounts a touching story about Dr. Geoff Tabin’s and Dr. Alan Crandall’s five-day mission to deliver eye care to a remote and war-torn region of South Sudan—the world’s newest country. The two eye-surgeons, along with John Dau, one of the original Lost Boys of Sudan, embark on a humanitarian expedition to restore sight at Dau’s Lost Boys clinic.

After the films, Michael Yei, the Manager of the International and Domestic Outreach Division at The John A. Moran Eye Center, will discuss the global burden of blindness and its impact on communities and individuals. Dr. Alan Crandall, M.D., the John A. Moran Presidential Professor and Senior Vice-Chair of Ophthalmology and Visual Sciences, will also talk about the causes and treatment of blindness and the work the Moran Eye Center’s Outreach Division is doing do help end preventable, curable blindness around the world–please join us!

For more information about the Utah Film Center’s mission click HERE. Or, to learn more about the upcoming programming schedule click HERE.