Skip to content
December Program: The Role of Filmmaking 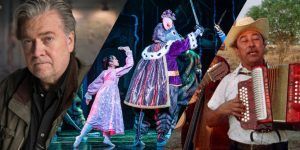 What a year! What a world! Our December program (see schedule here), as a snapshot, is an interesting referendum on the role of filmmaking in our moment in society. At the start of the month we have two projects that show how important it is that filmmaking has become accessible: The Utah Film Grad Showcase features emerging filmmakers from around our state, students whose voices are still developing, but who are pushing this medium in new directions and joining the vanguard of the next generation’s storytellers. Access to digital film tools mean we get to celebrate and record local stories like Ballet West’s Behind the Scenes film on the surprisingly close to home origin of The Nutcracker. Cumulatively, these stories become our histories.

When Les Blank and Chris Strachwitz made intimate, heartfelt profiles of norteño music along the Texas-Mexico border in 1976 (Chulas Fronteras), were they aware they were making history? Probably not, but decades later, when the public concept of our neighbors to the south is politicized and alienating, there is something affirming about being able to watch a forty-year-old film that reminds us of the cultural richness and history that exists beyond the sound bites and polarized reactions. Will we look back on films like Aquarela and wonder what our relationship to water in 2019 was like, compared to a future where polar ice, tropical storms, and access to clean water may have radically different significances?

The biggest question of the month is: What is the legacy of a film like American Dharma? Did it document the rise of fascist politics masquerading as populism that will break American democracy? Do films like this create a platform for hateful voices that don’t belong in public discourse? Or is the best way to combat objectionable ideas to look directly at them and understand them?

Film brings our world into focus, and good film is a piece of constructing a better future. We appreciate you exploring the world of film with us.